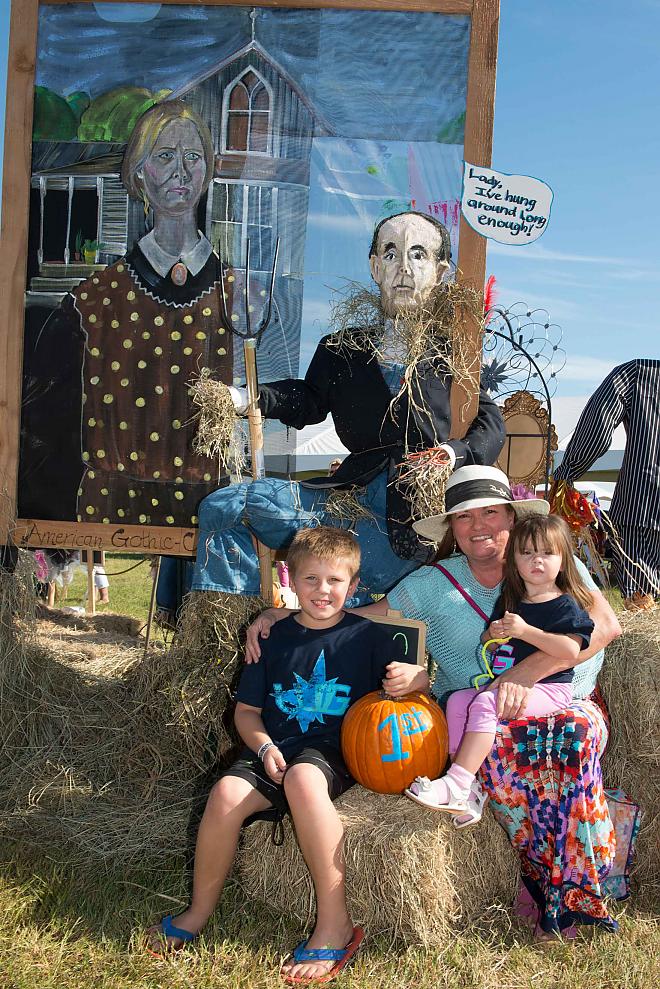 A creative take on the well-known Grant Wood painting, American Gothic, was named crowd favorite at the recent Fulshear Scarecrow Festival in Cross Creek Ranch, which attracted more than 5,000 people

The event also raised approximately $25,000 for Arts Fulshear, more than the combined prior three years.

Mary Catherine Watson won $1,000 for “American Gothic Crow,” which featured the farmer posed on hay bales with a copy of the iconic painting — showing only his wife — featured in the background.

Earning second place and $500 was a tribute to both the 1970s and today — “Big Yoda” by Deborah Neher. Winning the third place prize of $250 was Kimberly Graham for “GI Joe Crow.” Newmark Homes won the business division for “The Great Grassby.”

Nearly two dozen teams competed, with each team given $100 to build their creations based on this year’s “Decades” theme.

“This was probably our most successful festival yet,” said Rob Bamford, general manager of Cross Creek Ranch. “We had more than 5,000 people attend and raised a considerable amount more for Arts Fulshear, which is a great asset to the Fulshear community.”

Marcia Simmons, founder and executive director of Arts Fulshear, estimates the Scarecrow Festival has raised approximately $45,000 for her organization over the past four years.

“Arts Fulshear is thrilled at the overwhelming attendance at the Scarecrow Festival Saturday and support by our corporate partners,” Simmons said. “We raised a record amount to continue our children's art and theater programs and community theater. We especially want to thank Legacy Ford, Bird's Eye View Optometry, the Michael McCann Foundation and Bike for Mike, and Cross Creek Ranch and Johnson Development, who have all supported us for the past four years.”

The Fulshear Scarecrow Festival is just one of several large-scale yearly events open to the general public in Cross Creek Ranch, located minutes west of the Grand Parkway at the intersection of FM 1463 and FM 1093.

Bonterra Named 55+ Community of the Year
Read More
Step Into Extraordinary Trendmaker Model Home
Read More
Why Drive When You Can E-bike?
Read More
We use cookies to offer you a better, more personalized browsing experience. By using this website, you are giving your consent for us to use cookies. Read our Privacy Policy and Cookie Policy.
I Accept
X