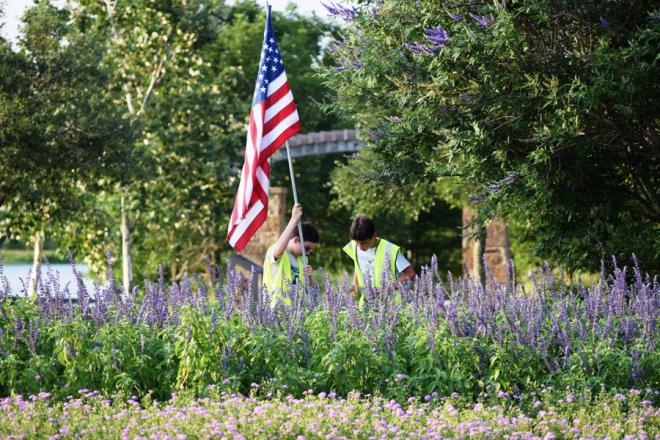 Boy Scout Troop 1103 keeps the stars and stripes flying in Cross Creek Ranch — and that’s just the beginning of how these young volunteers serve the community.

Andrew Van Chau, who is an assistant Scoutmaster in the troop, explained that the troop is active in the “Flags Across America” program.

Proceeds from the program help the troop buy equipment, host campouts and Scout events, as well as cover other expenses.

When they are not placing flags around the neighborhood for the holidays, Troop 1103 Boy Scouts can often be found at Cross Creek events, lending a helping hand — most recently at the Hit the Trails Family Festival.

“We do community activities and service projects whenever we can,” Van Chau said.

A number of Scouts also participate in the Honor Guard, a group of scout volunteers who conduct formal flag ceremonies at school district and city events.

Another way the troop is making a mark on the whole area is through Eagle Scout projects.

To attain the prestigious designation, the boys have to complete a significant service project.

“Our Eagle Scouts have provided leadership and service from Katy to Brookshire and right here in Fulshear,” Van Chau said.

He pointed out Scouts can often be seen on the trails in Cross Creek Ranch, preparing for hiking trips.

“You’ll see them out in the neighborhood with a full backpack on, just breaking in their boots,” Van Chau said.

He was a Scout when he was a child — and was glad when his own son joined at age 7. When the family moved from Chicago to Cross Creek Ranch in 2012, they started looking for a new troop to join and discovered 1103.

At first, Van Chau was drawn to the troop because a lot of the members went to the same school as his son.

“The level of parent involvement was encouraging,” he said. “From the weekly meetings to the camp outs, you knew there would be a lot of parents there at the events, both moms and dads. The boys get a lot of support.”

Through its designation, the troop perpetually honors the late Stan Stanley, a leader in Katy and a major supporter of the Boy Scouts. When it was established, the troop adopted Stanley’s birthday — Nov. 3 — as the unit’s number.

“He was very active with our organization,” Van Chau said. “He’s an example of the high caliber of leaders who have been involved with our Scouts.”

To continue to pay tribute to Stanley, Troop 1103 members also participate in the “Stan Stanley Day,” proclaimed by the Katy City Council and promoted by the Katy Economic Development Council as well as the Katy Chamber on Nov. 3 of each year.

“It’s a day of service in our community, and our Scouts contribute to that work to keep his vision and commitment alive,” Van Chau said.

Stanley and his wife Patsy mentored hundreds of Cub Scouts and Boy Scouts over the years and were instrumental in the formation of Cub Scout Pack 1103 and Boy Scout Troop 1103 in the Katy area.

Van Chau encourages area boys of all ages and their parents to consider joining a Boy Scout troop in their community.

Empowering boys to become leaders is the main goal, he added.

“It’s about making friends with other Scouts,” he said. “And it’s a great way for a father and son to spend quality time together. The boys also learn a lot of skills, whether it’s tying a knot, how to fish, how to not cut yourself when using a knife or how to do first aid.”

Troop 1103 Scoutmaster Mark DeRouen pointed out that a great community also is important to the Scouting program.

“Scouting is about having fun,” he said. “From participating in the Scarecrow Festival to hiking on community trails to canoeing in the lakes, Cross Creek Ranch has become our go-to place to have fun with our families and neighbors, as well as the Scouts in Troop 1103.”