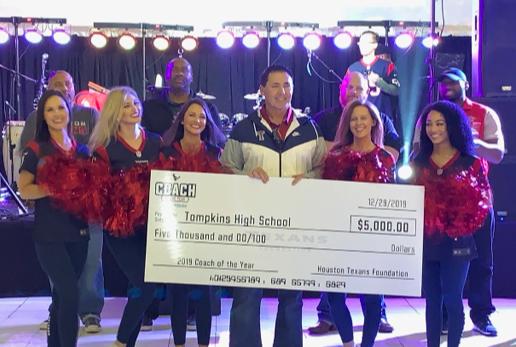 The Texans nominated McVey for the prestigious Don Shula NFL High School Coach of the Year award. The award, named for the winningest coach in NFL history, was created to honor exemplary high school football coaches for their character and integrity, leadership and dedication to the community, commitment to player health and safety and on-field success.

All Don Shula Award nominees are invited to attend the Pro Bowl where they are recognized in special ways during the NFL's week-long celebration of football.

The coveted honor came with a $5,000 check for the school's football program. Last October, McVey earned $2,500 for the program when he was named Houston Texans Coach of the Week.

McVey was named the new OTHS head football coach/campus athletic coordinator for the Katy ISD school in 2017. Since then, he has taken the Tompkins football team from zero wins in 2017, to a playoff contender in 2018 and 2019.

In addition to creating a powerhouse team, McVey made it a priority to integrate a positive family-like atmosphere with an emphasis on character building — not just on the field but in players’ day-to-day lives.

We congratulate Coach McVey and look forward to another winning season.

Bonterra Named 55+ Community of the Year
Read More
Step Into Extraordinary Trendmaker Model Home
Read More
Why Drive When You Can E-bike?
Read More
We use cookies to offer you a better, more personalized browsing experience. By using this website, you are giving your consent for us to use cookies. Read our Privacy Policy and Cookie Policy.
I Accept
X