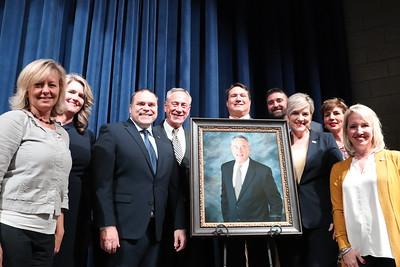 On Feb. 4, Katy ISD dedicated our new on-site junior high to the man it is named after, Joe Maxwell Adams.

The ceremony was attended by Adams and his family. He served on the Katy Independent School District Board of Trustees for 27 years dedicating his time to improving education for all Katy ISD students.

Adams served eight terms, three superintendents, alongside more than 30 board members, and held every board position, including four terms as president. During his tenure, Katy ISD grew from 20,000 to 70,000 students, added 39 new schools, countless renovations and additions, including groundbreaking performing arts and ninth grade centers. All of the progress was a result of $2.4 billion in voter-approved bonds supported by the board.

Adams stepped out and volunteered not only for his children, who attended Katy ISD schools, but also chose each day to advocate for children in the entire district. As the founding director of the Katy ISD Education Foundation, Adams volunteered in numerous ways across the district. He was a Keep Encouraging Youth Toward Success mentor, read to elementary students through the Promise to Read program and was involved in the Katy ISD Junior Achievement program.

Born and raised in Southeast Texas, Adams is a graduate of Texas A&M University, where he was a member of the Corps of Cadets and Texas Aggie Band. Adams and his wife, Donna, have two children and seven grandchildren.

Adams Junior High opened its doors last August within our community. The mighty Vikings are led by Principal Elisabeth Brodt whose goal is to create a culture of excellence through relationships, perseverance, authentic engagement and innovation.

This is the third school Katy ISD has opened within Cross Creek Ranch. The junior high joins Randolph Elementary and Campbell Elementary. Jordan High School will open its doors this August.